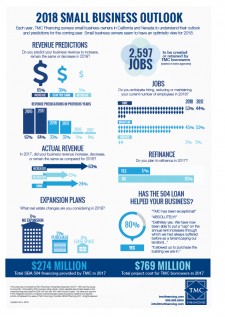 OAKLAND, Calif., February 16, 2018 (Newswire.com) - Each year, TMC Financing surveys our small business clients in California and Nevada to get a pulse on their outlook and predictions for the coming year. According to the 400+ small business owners who participated in the survey, the outlook is overall optimistic and positive.

On a national level, small business optimism in the United States soared last year, reaching the highest level in decades. Our respondents also show optimism for 2018 with 65 percent of respondents predicting an increase in revenue for the year. This prediction is higher than it’s been in recent years.

“Over half of our clients plan to hire new employees in 2018, which is fantastic,” TMC EVP Kurt Chambliss said. “The survey went out to our current portfolio, which includes recent clients from the past year as well as clients who took a loan out with us over 10 years ago. It’s terrific to see that borrowers who have settled into their buildings and funded their loans are continuing to grow and expand their staff.” Fifty-three percent of respondents anticipate hiring additional employees in 2018, an approximate 20 percent increase from last year.

Seventeen percent of respondents reported that they plan to refinance their current debt this year. The SBA 504 Refinance Loan was introduced in 2016 and is a program proven to be extremely useful to small business owners. It allows borrowers to refinance conventional commercial real estate loans – allowing them to free up capital trapped in real estate and take advantage of the attractive terms of the 504 Loan.

Eighty percent of respondents reported that the 504 Loan has helped their business. According to Peter Pritchard, owner of Peerless Materials Company, the 504 Loan has greatly helped. Pritchard reported the main benefit was the building he was able to acquire and the rental stability he gained for the next 15 years.

Thomas Belchar, president of Underwater Resources, also responded with a strong yes when asked if the 504 Loan helped his business. “We have now been able to put a cap on the annual rent increases through which we had always suffered as a tenant when we were paying our landlord for our space,” says Belchar.

In fiscal year 2017, TMC Financing provided $274 million in SBA 504 financing to 247 small business owners across California and Nevada. TMC borrowers from the past year plan to create or retain a total of 2,597 jobs.